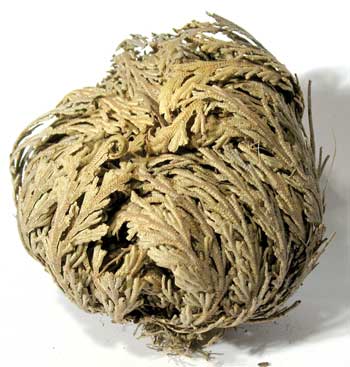 The Rose of Jericho plant, also known as the resurrection plant, is a truly amazing species. Known for its ability to come back to life after years of dormancy, this tumbleweed is shrouded in magical history and traditions.

Origins of the Rose of Jericho

Two plants share the name "Rose of Jericho." The true plant, Anastatica hierochuntica, is found in northern Africa and southwest Asia. When dry, this round gray plant shrivels itself into a small ball, keeping its seeds safe from the elements. As long as its roots remain intact and in the ground, this plant will open and turn green when it gets wet.

The false Rose of Jericho, Selaginella lepidophylla, grows in the Chihuahuan Desert, located in the United States and Mexico. Unlike the true Rose of Jericho plant, this plant can thrive even if its roots are disrupted. When no water is present, the plant curls inward and lays dormant for years on end. When it encounters water, it opens itself up and restores its vibrant green color.

The Legend and the Magic

Catholic lore speaks of the Rose of Jericho in relation to Jesus, his crucifixion and resurrection. The plant was said to bloom regularly and consistently while Jesus was alive. Upon his death, the plant mysteriously shriveled up and all of its flowers withered away. When Jesus was resurrected three days later, the plant blossomed once again in symbolic celebration of his rebirth.

Christians continue to incorporate the Rose of Jericho into their religious observances. The plant is displayed in a bowl of water during the Christmas season. It is brought out again on Easter, in remembrance of Jesus’ sacrifice and resurrection. In keeping with the religious traditions of Catholic families, the plant is often passed down from generation to generation.

Followers of Hoodoo use Rose of Jericho in conjuring spells and to improve one’s prosperity. The water that the plant sits in is believed to contain powerful magic.

Santeria associates the plant with the Orisha Shango, the spirit of thunder and lightning. The plant is placed on his altar as an offering. Rose of Jericho is also said to bring happiness to those who bless themselves with the plant.

Invoking the Power of the Rose of Jericho

The plant should be laid in a dish of water, making sure only its roots are covered. Let the plant sit for no more than seven days at a time, as it will begin to rot after prolonged exposure to water.
The water is then said to have mystical qualities and can be sprinkled about the house to erase negative influences, bring peace, harmony and abundance. The Rose Of Jericho can be used over and over again!

Place the plant in a shallow bowl of water by your front door to invite prosperity into your dwelling. Place five coins in the water to increase your opportunity for success. Sprinkle Rose of Jericho oil on a prosperity candleand recite the following prayer to bring you good luck.

“Divine Rose of Jericho: I ask all this through the strength that you lock yourself in the love of Christ Jesus and its great mercy, Amen.”

Sold Out
Add to Cart