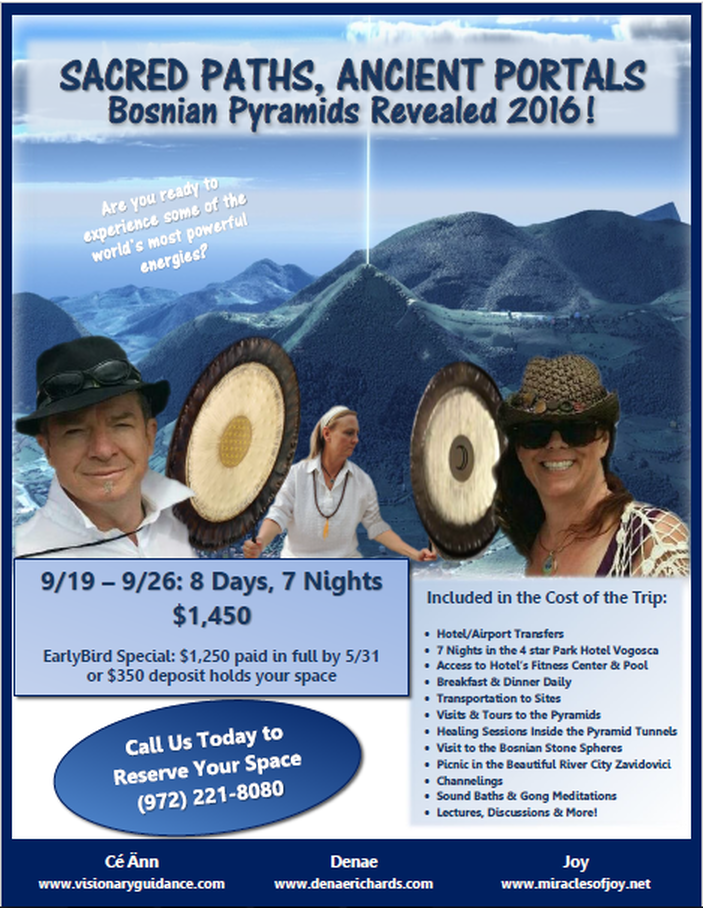 What Makes the Bosnian Pyramids so Mysterious and Appealing?

Try to visualize exploring this Sacred Place with these facilitators: A master teacher of Galactic Healing - imagine the Energy and Magic; An international Trance Channel who connects to all Frequencies - wonder the Truths to be revealed; A Sound Healer with the masterful Music of Gongs - a musical bath to integrate the energies and frequencies…. Here’s more information to fill-out your vision:

The Bosnian Pyramid Complex was discovered in 2005 by Dr Semir (Sam) Osmanagich. Not only is this the first pyramid to be discovered in Europe, but it is part of the largest valley of pyramids and represents the biggest complex of pyramidical structures in the World. According to radiocarbon dating and pedagogical analysis, they were built over 10,000 years ago. The Complex consists of: Pyramid of the Sun, (over 721' in height; larger than the Cheops pyramid and one third taller than Giza), Pyramids of the Moon (623'), Dragon and Love. An ancient temple has also been discovered adjacent to the complex, the Temple of Mother Earth.
The Pyramids of Sun, Moon and Dragon form a perfect equilateral triangle with 1.35 miles distance between their tops and all are oriented toward cosmic North. The Sun pyramid is larger, older, and more perfectly oriented than the Great Pyramid at Giza.
Geo-radar and thermal analysis confirmed the existence of passageways and chambers inside. This underground labyrinth is tens of miles long and consists of passageways, chambers, and artificial lakes. The presence of negative Ions in the labyrinth of tunnels reach an average of 18,000 ions per cubic cm, as opposed to roughly 400 – 500 per cc in most towns and cities; and a Bovis reading of 25,000 as well, when the reading for an averagely healthy person is only 5,000.Researchers also detected a Schumann resonance of 7.83 kHz, which is the most beneficial and optimal for physical, mental and spiritual health of human beings, as well as a steady energy beam that has been measured coming through the top of the Sun Pyramid with a radius of 4.5 meters and a frequency of 28.4 kHz - not used in any of our current technologies.


Were the observance of light orbs in and around the tunnels mentioned?

Whatever the mysteries, we invite you to spend 8 days with us and these amazing pyramids, healing chambers, and other sacred sites in the area... We will begin most days bathed in the sound frequencies of the gongs and bowls, then continue our journey exploring the pyramids and chambers within. Surrounded by meditations, channeled messages, and the connective frequencies, come join: Joy, Ce Ann, and Denae as they explore the many enigmas and healing attributes of the Bosnian Pyramids!

Request your Itinerary for more details.
Click here to make a DEPOSIT